A San Francisco institution for 90 years and counting

When Robert Sanchez arrived in the ‘City by the Bay’ he carried his prized possession— a 20 lb. rod iron tortilla press. He had a single goal; to build Northern California’s first tortilla factory. Señior Sanchez insisted on using only 100% natural, California grown ingredients in his products. A tradition that is honored to this day. Our products are also gluten free and GMO free.

90 years later and Casa Sanchez is still the leading manufacturer of authentic Mexican salsa and chips in California and beyond. 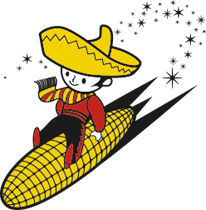 And many more retailers.

A History of Casa Sanchez

Roberto and Isabel Sanchez came to the U.S in the early 1900’s from Mexico. They opened the very first mechanized tortilla factory in Northern California and sold tortillas by the pound, wrapped in paper tied with string. Through hard work and the help of their three children; Juliana, Robert Jr. and Lupe, the business grew to a wholesale mexicatessen. Tortillas were delivered by the hundreds in International diesel station wagons. In the 1960’s, Club Sanchez helped pioneer San Francisco’s FIllmore district jazz scenes.

Then, Robert Sanchez Jr. fell in love & married his most intelligent and hard worker, Martha. Soon their 5 children grew up, and into the business they went. Jimmy the baby was the inspiration for the Casa Sanchez logo “Jimmy the Cornman”. The eldest Robert III collected dozens of honors including Business Man of the year by the Chamber of Commerce. Bob expanded the business into a top ten highest grossing business in San Francisco. Now the fourth generation Robert Aranda is responsible for helping Casa Sanchez in its expansion and opening the doors for the fifth generation not far behind.